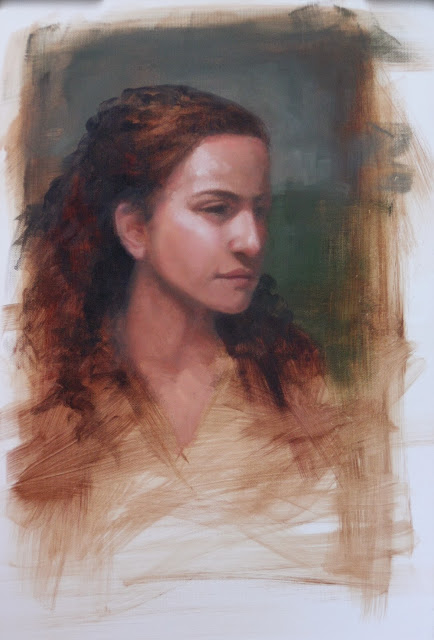 I have only recently began painting alla prima (wet into wet).  This was my second attempt at painting a model in a single session.  In the past, I usually used dry mediums for open studio or figure drawing sessions.  I feel like I learned a lot from the first painting that I was able to use with this one.  Two things made a huge difference: soft natural hair brushes (mostly red sable), and using more paint.

More than half way through, I found myself working out drawing problems while stuck in the mid-tones.  After returning from the lunch break, I was determined to paint stronger highlights and add more color variations.  After making some big bold statements, my artist friend, Christy Olsen, said, "So... when are you going to punch up the highlights?"  Aargh!  She was right.  As soon as I stepped back, my "bold" highlights disappeared.
Time to step it up.

One thing that I tried on this portrait that I had not done before, was to consciously switch the temperature of the highlights and shadows.  In reality, the model was lit with a warm light casting cool shadows.  When I chose to make the highlights cool, they helped the prominent side of her face pop with more interest.  Warming the shadows also helped bring some much needed life to side of the face that was turned away.  I was far enough back from the model that I could barely distinguish the edge of her face from the background.  Adding warmth helped define her face from the green by using the color for contrast without changing the value or adding definition that I could not see.

I was having so much fun, I could have kept painting for several more hours.  Perhaps it's best that I ran out of time before I could overwork it.