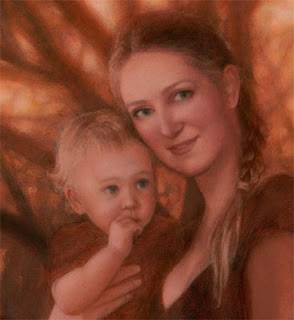 This painting is a labor of love that I worked on over the course of a year.  It is a self-portrait of me with my boys, but it also tells a more universal story.  I began by manipulating rough images in Photoshop.  This piece is a combination of about 8 photographs and 4 color inspiration references (that changed as the painting evolved).  Part of what made this piece such a challenge was that there was an intangible goal that could only be found by working through the painting process. 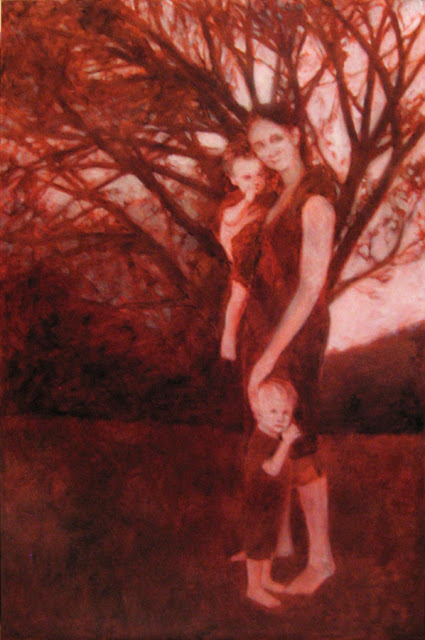 First, I roughly blocked in darks and lights to establish the overall composition. 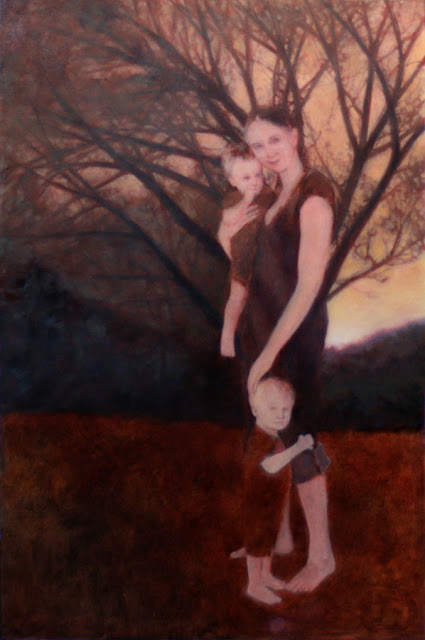 At this stage, I began refining the faces, and painted some color and detail into the tree.  I also lowered my boy's arm so that his body language looked more relaxed. 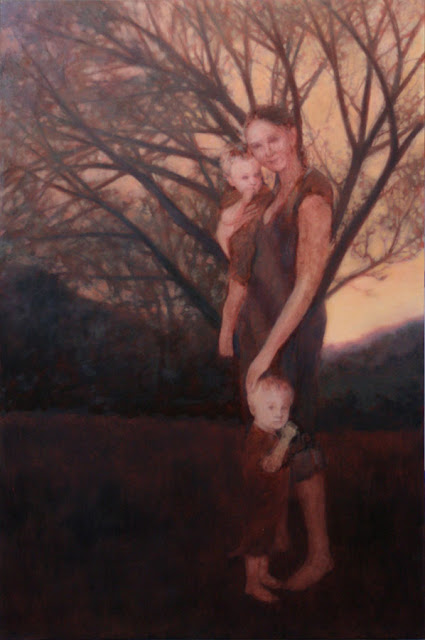 I noticed the figures were jumping off of the canvas instead of integrating with the foreground, so I knocked them down with dark glazes.  The legs, in particular, were made darker to ground them like the tree.  I also realized that the glow at the horizon drew the eye away from the focus of the painting.  You might notice that I raised the arm back up.  I like the compositional lines better, and it just felt right. 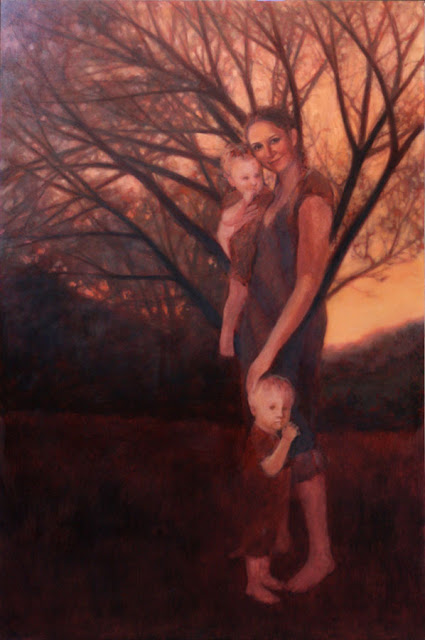 My original color pallet was going to be rusty fall colors against a blue-gray sky.  I made the decision, after blocking in the values, that dawn was much more appropriate to enhance the symbolism.  Since I chose to adjust the colors to indicate early morning light behind us, I felt that I needed to darken the figures even more. 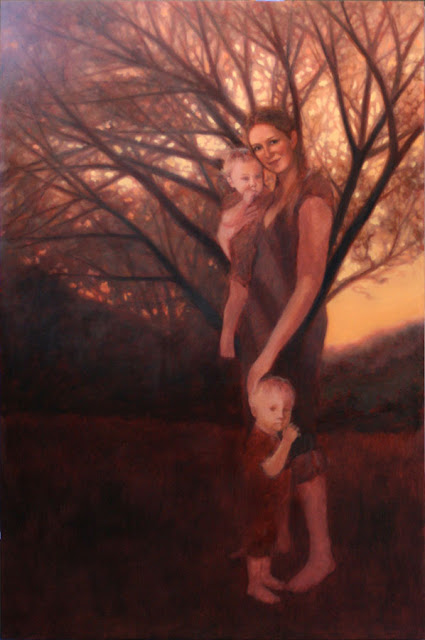 The figures felt too dark and somber, so I tried brightening the background instead.  This phase seemed too harsh at the time, so I ended up glazing more color back over the light.  If you skip to the end, you can see that I did end up brightening the glow and lightening the face in relationship to the lighter values.  Sometimes we, as artists, know where we think a painting needs to go, but the correction seems  wrong in the context of existing errors.  I find myself telling that to my students, yet I made that same mistake here. 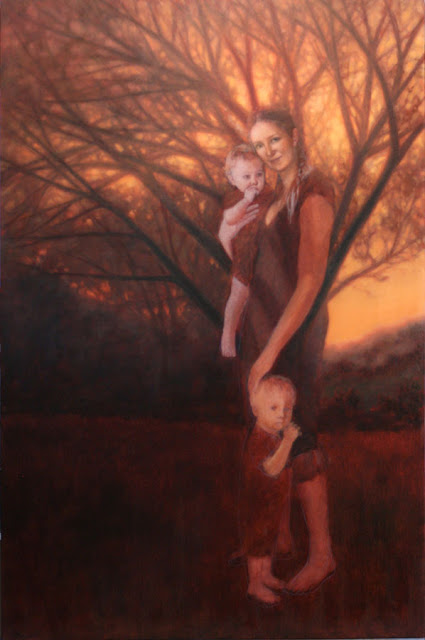 I also realized (finally) that the branches in front of the brightest light needed to lighten, warm and soften due to the light spilling around the edges.  I should have remembered that from my painting, Remembrance.  I had to overcorrect here to cover the darkest branches. 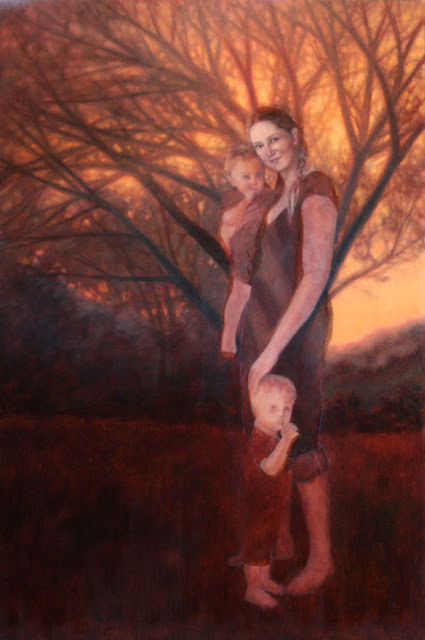 This far into the painting, and I discover some significant drawing errors.  Aargh! Oh well.  If corrections need to be done, they need to be done.  This stage shows corrections in progress.  I think I might post some close-ups of the ever-changing stages of the faces.  This picture is for any of you learning to paint who work on a piece for an entire week or two, and then are surprised at how long it's taking! 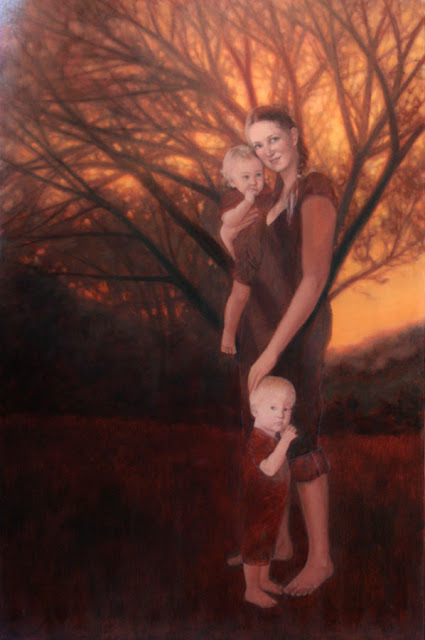 It is getting close to finished here, but still had a way to go.  I chose to work the faces intentionally on the light side so that I could create richer colors using transparent glazes. 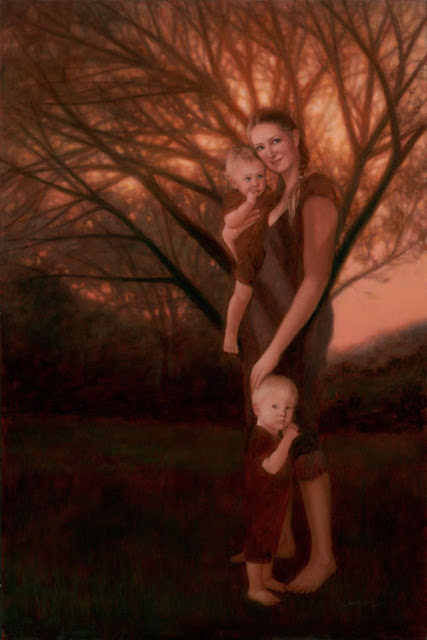 I had another "ah-ha" moment close to the end.  If the sun was higher, it would add dramatic light around the faces, but it could also be cooler and more subtle along the horizon.  Not only did this resolve the nagging problem of the bright sky at the horizon, it was transformational.  With the addition of pink, cooler greens and blue-grays became more noticeable and I was able to build off of them.  I could also add pinker flesh tones that no longer felt out of place.  It changed the whole dynamic of the painting, and, finally, let me bring this piece to completion.  It represents everything that I had intended for it.  I hope that you enjoy it, too. 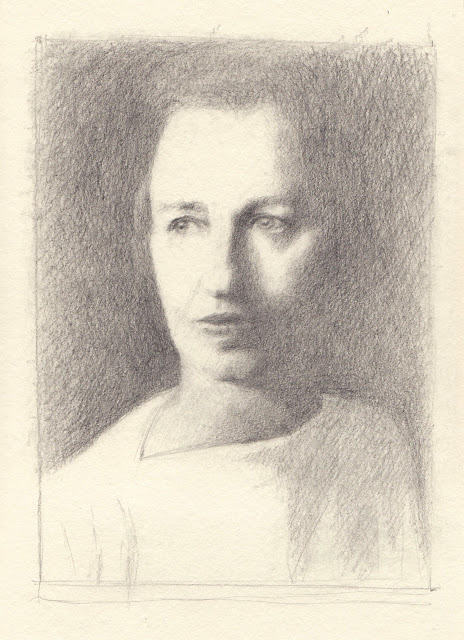 This drawing was done as a teaching demonstration for my students.  This is how far I got during the class.  The following day I was able to complete the drawing at home in my studio. 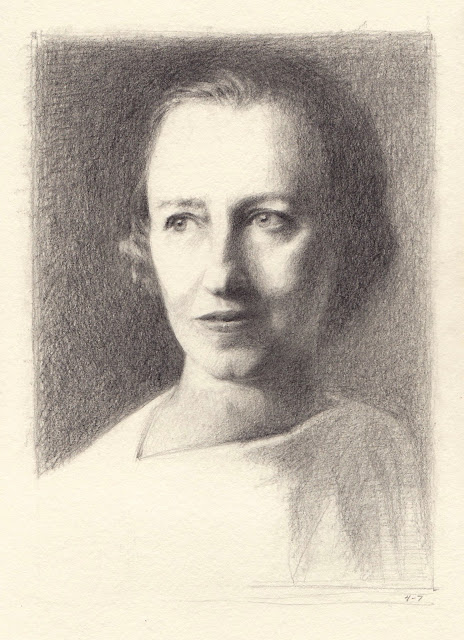 These paintings were created using a modified version of the piambura technique coined by the contemporary naturalist painter Adrian Gottlieb.  They began with the classic earth toned foundation of traditional imprimatura  underpainting developed during the Renaissance.  The application of paint is minimal with a focus on accuracy right from the beginning.  Much of the background color shows through.  Unlike Gottlieb's piambura technique, I used glazes and minimal overpainting.  It is very similar to the process that I used for Wyatt, but with a monochromatic color scheme to create a more classic old-fashioned feel.